The Indian EV Charging Market to Reach $8 Billion by 2025 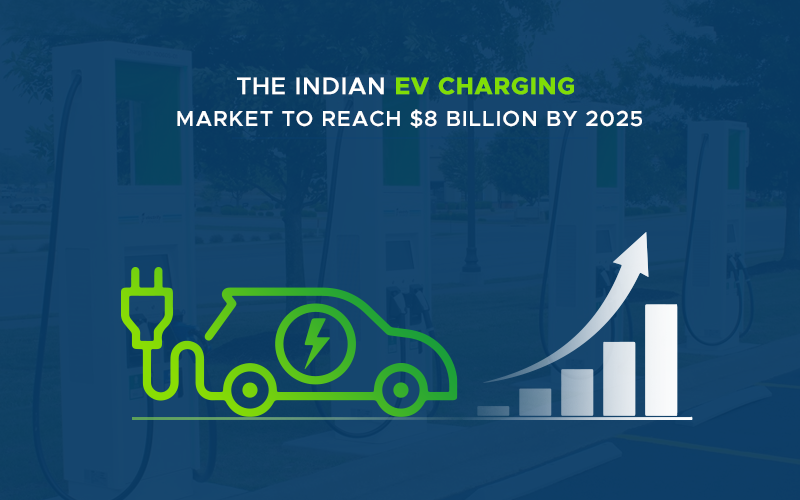 The electric vehicle (EV) market in India is growing at an exponential rate. The country has been making remarkable efforts to reduce the carbon footprint left by the automobile industry. As a result of the Government's initiative, we are seeing more and more hybrid and electric vehicles hitting Indian roads. Despite this, several challenges must be addressed before electric vehicles become commonplace on Indian roads. These include infrastructure readiness, affordability of EVs, as well as the availability of charging stations. According to reports by Allied Market Research titled 'Electric Vehicle Charging Market: Opportunities and Forecast, 2021', India's electric vehicle charging market is poised to reach $8 billion by 2025. Let's take a look at some of the major factors driving the market forward:

Hybrid and Electric Vehicles to Dominate the Indian Roadscape by 2025

In FY 2022, total vehicle sales in India were 17 million units (passenger vehicles, commercial vehicles, and two-wheelers). But the automobile industry in India is currently dominated by petrol and diesel engines; these vehicles produce a significant amount of greenhouse gases. But the scenario is fast changing; Indian Government has put up a plan to phase out diesel-run vehicles. As a result, there will be a significant rise in the number of hybrid and electric vehicles on Indian roads. As per the CAGR report, the EV sector is projected to grow by 43.13% by 2030. Electric Vehicles are expected to account for 30% of total vehicles sold in India by 2030. And this paradigm shift from conventional to electric vehicles needs a prolific charging infrastructure.

Increase in Awareness About Environmental Issues

Our planet is experiencing an increase in nature's fury. The world is experiencing different calamities like floods, cyclones, and drought at an alarming rate due to drastic changes in weather patterns. A consistent rise in the planet's average temperature has been observed over the last few decades. While it is a fact that these are natural phenomena, human activities have further added to the effects of disasters. The overuse of the environment to support economic activities such as mining, deforestation, and transportation has negatively impacted the environment and is responsible for the significant rise in carbon footprint. India has committed to cutting its carbon-dioxide emissions net-zero by 2070. To achieve this, electric vehicles will play a significant role and charging infrastructure needs to be in place.

Countries with better charging infrastructure have seen accelerated adoption of electric vehicles. Charging stations are available both in AC and DC format. AC charging stations are commonly used in charging EVs. DC chargers are relatively fast and, therefore, more convenient. When we speak about a DC charger, to be succinct, a 30kW DC charger can charge a four-wheeler with having 30kW battery capacity in less than 60 minutes.

Charging infrastructure is emerging as a key component in supporting the rapid growth of electric vehicles. India has a large potential market for electric car adoption. The recent hike in sales of EVs is due to more efficient vehicles. The present Government's initiative to build more charging stations will allow rapid EV adoption in the country. Thus the Indian electric vehicle charging market is expected to grow significantly in the coming years. This can be attributed to the growing demand for electric vehicles. As the DC fast charger manufacturer in Ahmedabad, it is our quest to provide our EV-adopting customers with the best, quick, and most affordable charging solutions.